Geralt of Rivia (Polish: Geralt z Rivii) is a witcher and the protagonist of the Witcher series of books by Andrzej Sapkowski and its adaptations (including The Witcher and The Witcher 2: Assassins of Kings computer games). Witchers are monster hunters for hire. They possess nearly superhuman abilities and are expert swordsmen.

Andrzej Sapkowski, born 21 June 1948 in Łódź, is a Polish fantasy writer. Sapkowski studied economics, and before turning to writing, he had worked as a senior sales representative for a foreign trade company. His first short story, "The Witcher" ("Wiedźmin"), was published in Fantastyka, Poland's leading fantasy literary magazine, in 1986 and was enormously successful both with readers and critics. Sapkowski has created a series of tales based on the world of "The Witcher", comprising three collections of short stories and five novels. This cycle and his many other works have made him one of the best-known fantasy authors in Poland in the 1990s.
read more...

To date, only one collection of short stories and the first novel in the Witcher saga have been translated into English.

After much anticipation and a couple of unofficial leaked videos, CD Projekt RED finally released an official trailer for The Witcher 2: Assassins of Kings. 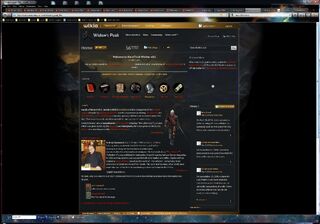 more images from The Witcher 2...

Retrieved from "https://widowspeak.fandom.com/wiki/Widow%27s_peak_Wiki?oldid=5983"
Community content is available under CC-BY-SA unless otherwise noted.